Dan Plant, executive head of strategy at Starcom, on the ad industry's crucial role in restoring consumer confidence and getting the economy moving.


Those are the now famous words from Sam Walton, the founder of Walmart and at Starcom, we believe that they have never been more relevant.

The quarterly forecast from the OECD in June on the state of the UK economy don’t make for great reading. It suggests that a best-case scenario is that the UK economy will shrink by 11% in 2020 and that is assuming there is no second wave of coronavirus. We also know that in April, the first full month of lockdown, the UK economy slumped by 20.4%; an incredible amount that dwarfs all previous monthly downturns.

Given all this, it is clear that we are now facing a prolonged recession, and consumers are catching on to this very quickly. In March, consumers were relatively positive with a consumer confidence Index of -9, but in May, it dropped to -36, and whilst it grew in June to -30, this is still the lowest it has been since the depths of the 2008 financial crisis.

Marketing practitioners now face a number of questions; “What now is the role for brands? What is the sensible business response? Can we, by our actions, contribute positively or negatively to economic growth?”

At this point I’d like to suggest something that is possibly controversial. Does the advertising industry actually have both an opportunity and a responsibility to grow consumer confidence when it’s low, rather than just take advantage when it is buoyant?

At the beginning of the 2008 recession, the marketing consulting industry went into overdrive analysing previous recessions and how to behave. In doing so, a number of things became very clear.

Even though this became well understood it didn’t encourage advertisers to maintain spend. In fact having done an up to date analysis of GDP versus ad spend, we can see that in 2009 ad spend dropped 14% YOY, massively exceeding the 4.2% drop in GDP growth.

What we also see is that in real terms, advertising spend didn’t get to true growth versus 2007 until 2014/2015. Interestingly we see that that is when consumer confidence started to finally pick up after a prolonged slump.

So the thought I’d like to land here is this – is the advertising industry partly responsible for accentuating fluctuations in consumer confidence? Is this more of an opportunity than we realised?

One of the primary roles of advertising is to give out signals about brands. Signals that a brand understands its consumers and what they need. By spending less on cheaper media, and focusing on short term promotionally led advertising, we are giving out signals that times are hard and that we are worried. Fear begets fear. If businesses behind the big brands (that we see as permanent and stable) are scared, then we should be too.

Is the reverse also true? If we see big businesses continuing to invest in advertising and their brands, does that signal to consumers that they can have confidence that things are going to get better sooner rather than later? If we refuse to “take part” in a recession like Sam Walton chose to do, can we actually decrease the impact overall?

The good news is that making that investment would not be foolhardy. Recent GfK data showed that although some sectors haven’t done so well in the first months of lockdown (not many people are splashing out on big ticket purchases right now for example, and before last week, no-one was allowed to fly anywhere), that doesn’t mean that people aren’t spending money at all. In fact, there are a number of people who are now planning to make purchases, who had not planned to do previously. 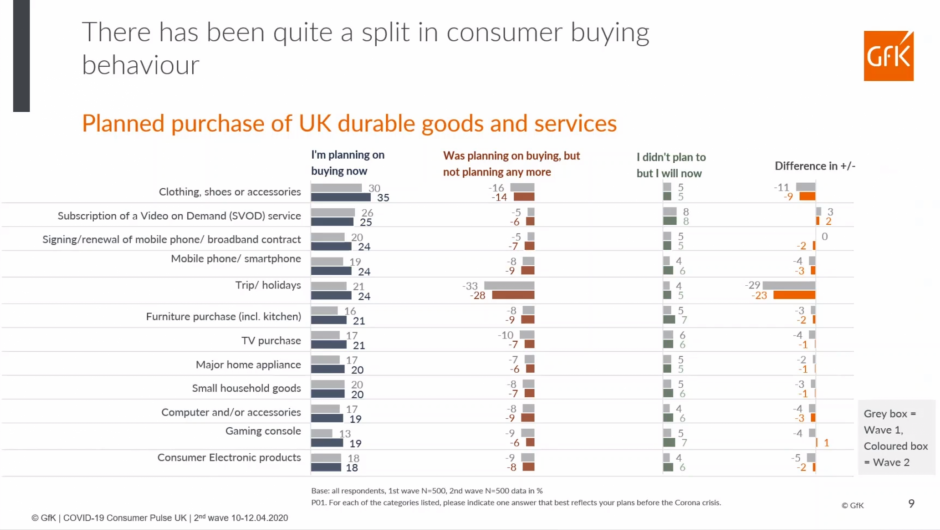 Those new potential customers need to be encouraged to spend money, they need to be given the confidence to do so and be reassured that it is the smart decision.

We believe that brands have a significant role to play in building that confidence and in doing so rebuilding the economy, and history tells us that the brands that commit are the ones that will come out stronger on the other side.

As GfK’s client strategy director says: “This really is the time you can build great amounts of brand equity if you’re in sync with how consumers are thinking or feeling”. There is no better way to be “in sync” than to actually help drive those feelings ourselves.

To sell or save the world? Adland can do both